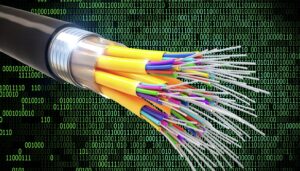 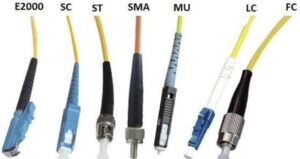 According to the different modulus of the transmission point, optical fiber can be divided into single-mode fiber and multimode fiber.

The so-called “mode” refers to a beam of light entering the optical fiber at a certain angular speed. Single-mode fiber uses solid-state laser as the light source, and multimode fiber uses light-emitting diode as the light source. Multimode fibers allow multiple beams of light to travel simultaneously in the fiber, resulting in mode dispersion (because each “mode” light enters the fiber at a different angle and they arrive at the other endpoint at a different time, a feature called mode dispersion). 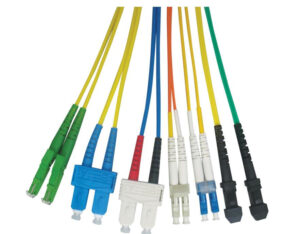 Multimode fiber The optical signal in multimode fiber propagates through multiple paths; It is generally recommended to apply when the distance is less than a mile.

The effective distance from the transmitter to the receiver of multimode fiber is approximately 5 miles. The available follow-up is also affected by the type and quality of the transmit/receive device; The stronger the light source, the more sensitive the receiver and the farther the distance. Studies have shown that the bandwidth of multimode fiber is approximately 4000Mb/s。

Single-mode fiber is manufactured to eliminate pulse broadening. Due to the small core size (7-9 microns), light jumps are eliminated. Focused laser sources are used at 1310 and 1550nm wavelengths. These lasers shine directly into the tiny core and propagate to the receiver without noticeable jumps. If multimode can be compared to hunting, and many projectiles can be loaded into the barrel of a gun at the same time, then single-mode is a rifle, and a single light is like a bullet. 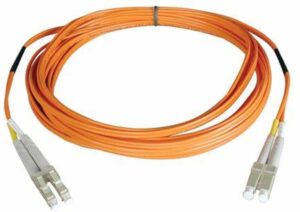 In addition, the distance loss of a single-mode signal is smaller than that of multimode. At the first 3000 feet, multimode fiber can be lost. Its LED has 50% of its optical signal strength, while singlemode loses only 6.25% of its laser signal at the same distance.

The bandwidth potential of singlemode makes it the only choice for high-speed and long-distance data transmission. Recent tests have shown that 64 channels of 40G Ethernet can be transmitted over a distance of up to 2,840 miles on a single-mode optical cable.

In safety applications, the most common deciding factor in choosing whether to be multimode or singlemode is distance. If there are only children’s miles, multimode is preferred because LED transmitters/receivers are much cheaper than the lasers required for singlemode. Single-mode fiber is best if the distance is greater than 5 miles. Another issue to consider is bandwidth; If future applications may include the transmission of large bandwidth data signals, then single-mode would be the best choice. 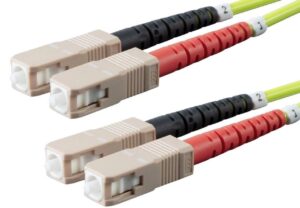 Multimode Fiber Multimode Fiber: The center glass core is thick (50 or 62.5μm) and can transmit multiple modes of light. However, the dispersion between modes is large, which limits the frequency of transmitting digital signals, and will be more serious with the increase of distance. For example, a 600MB/KM fiber only has 300MB of bandwidth at 2KM. Therefore, the distance transmitted by multimode optical fiber is relatively close, generally only a few kilometers.

Single Mode Fiber: The center glass core is very thin (core diameter is generally 9 or 10 μm) and can only transmit one mode of light. Therefore, its inter-mode dispersion is very small, suitable for long-distance communication, but there are still material dispersion and waveguide dispersion, so that single-mode optical fiber has high requirements for the spectral width and stability of the light source, that is, the spectral width should be narrow and the stability should be good. It was later found that at a wavelength of 1.31 μm, the material dispersion and waveguide dispersion of single-mode fiber are either positive and one negative, and the magnitude is exactly the same. This means that at a wavelength of 1.31μm, the total dispersion of single-mode fiber is zero. From the perspective of the loss characteristics of the fiber, 1.31μm is exactly a low-loss window of the fiber. In this way, the 1.31μm wavelength region has become an ideal working window for optical fiber communication, and it is also the main working band of the practical optical fiber communication system. The main parameters of 1.31μm conventional single-mode fiber are determined by the International Telecommunication Union ITU-T in the G652 recommendation, so this fiber is also known as G652 fiber. 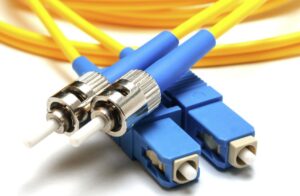 Multimode fiber only supports dual-fiber transceiving, because multimode is transmitted by refraction, and two wavelengths cannot be transmitted in different directions on the fiber. Only one wavelength can be used, so it cannot be multiplexed.

Singlemode fiber and multimode fiber can be easily distinguished from the size of the core. The core of single-mode fiber is very small, about 4~10um, and only transmits the main mode. This completely avoids modal dispersion, resulting in a wide transmission band and a large transmission capacity. This optical fiber is suitable for large-capacity, long-distance optical fiber communication. It is an inevitable trend in the development of optical fiber communication and light wave technology in the future.

Multimode fiber is divided into multimode mutation fiber and multimode gradient fiber. The former has a larger core diameter and more transmission modes, so the bandwidth is narrower and the transmission capacity is small; The refractive index in the latter core decreases with the increase of radius, and a relatively small modal dispersion can be obtained, so the frequency band is wider and the transmission capacity is large, and the latter is generally used at present.

5G will bring a new revolution in IIoT

On Nov 18th, Together with our partner Qualcomm and Ericsson, SIMCom held a 5G webinar 'IIoT Revolution in 5G... read more

What is a TWS Bluetooth headset?

The most popular on the market in 2018 is the TWS Bluetooth headset. What is a TWS headset? What... read more

On December 15, Quectel announced the launch of a new generation of flagship Android smart module SG865W-WF, and will... read more

5G deployment costs are high, it is better to switch to virtualized vRAN

Following the commercialization of 5G from 2019 to 2020, 2021 has become a critical year for accelerating 5G development.... read more

According to a report on the telecompaper website on June 22, officials of the Portuguese Interior Ministry recently announced... read more